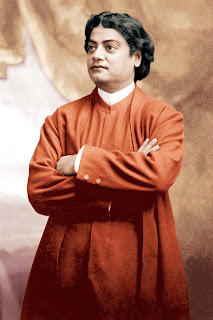 '09/11', this number is forever engraved on the minds of millions of people around the world, due to two unforgettable events that took place on this date. Both of these incidents have a connection with United States of America. One is the unforgettable stigma in the history of humanity, the highest form of terror carried out in leadership of Osama Bin Laden, crashing two Airplanes at the World Trade Center towers in New York in 2001, killing nearly 3,000 people.

So on the other hand, on the same date in the year 1893, before 127 years, an event took place which has given eternal glory to Bharat Mata. This is the same date when Swami Vivekananda, the heroic son of Bharat Mata, presented the principles of Hinduism or Sanatan Dharma to the Western countries for the first time ever in the history at World’s Parliament of Religions held in Chicago, USA.

In any society of the world, it is common to celebrate the birth anniversary of a special person. But there is only a single speech in the world, which is celebrated and remembered even today, and that is that 5-minute speech of Swami Vivekananda. It is still imprinted in the minds of the people in such a way that the President of the United States, be it Barack Obama or Donald Trump, does not forget to mention it during their visit to India.

Swami Vivekananda is a personality, whose mere name would bring in our mind that image of his dressed in ochre coloured robes and turban, possessing compassion for the fellow brethren of India, standing on the lofty peak of self-confidence. Only his name and this picture is sufficient to generate waves of enthusiasm in a person's veins, then listening his words is altogether a different thing.

The world's first Parliament of Religions, which began on September 11, 1893; was not just a 1-day event, but a 17-day extended discussion, in which representatives of many religions from the Eastern and Western world presented papers on their respective religions. On the first day, only 17 dignitaries had the privilege to present a welcome note, one of whom was Swami Vivekananda. Swami Vivekananda at that time was a sannyasi from a politically dependent India, who stumbled all over India before coming to Chicago, stayed in the huts of the poor, or even slept hungry on the streets. How could he have known that it requires preparations to speak in front of such a large gathering. He did not even get admission in the Religious Conference to represent Hinduism, as he did not even realize that he had to register in advance or have a reference letter for the same. But thanks to John Henry Wright, a professor from Harvard University, who was impressed by Swamiji's knowledge, and recommended to John Henry Barrows, chairman of the Parliament, that Swamiji should be allowed to represent Hinduism. There is still a long history of the difficulties Swami faced in reaching the place where the event was held. But the point is that if such a person, who has gone through all these, when he is to speak before 4000 people, it is very natural to get nervous. At last it was the time for him to speak. Then he mentally prostrated before Saraswati Mata and his Gurudev Shri Ramakrishna Paramahansa, and spoke out from the bottom of his heart’s feelings "Sisters and brothers of America". These words made history and shook the entire Parliament. In this context, the Chairman of the Parliament writes that the applause on these words could not stop for almost a few minutes. These words of Swamiji were the core of his teachings he was to going to present to the world in the time to come.

About two minutes out of five minutes went by in a roar of applause. Now is his three-minute time, in which he seems to be advancing the spirit of his first two words. "I am proud to belong to a religion which has taught the world both tolerance and universal acceptance. We believe not only in universal toleration, but we accept all religions as true.”, he said. These words of Swamiji were very unusual at that time, as the representatives of almost all other religions narrated their own religion and declared other religions to be false or inappropriate. Swami Vivekananda could utter these words with firm conviction, the reason being that his personality was shaped by a great saint of the century, Shri Ramakrishna Paramhansa. Ramakrishna Paramahansa is perhaps the first person in world history to attain Godhood, not only by practicing Hinduism, but also by practicing Christianity as well as Islam. He said, "By following every creed and religion, I have reached to the same point." It was just a conch shell to convey the message of his Gurudev to the world and to establish a universal religion.

In his next words, he says that "Sectarianism, bigotry, and its horrible descendant, fanaticism, have long possessed this beautiful earth. They have filled the earth with violence, drenched it often and often with human blood, destroyed civilization and sent whole nations to despair." In conclusion, he said that, “I fervently hope that the bell that tolled this morning in honour of this convention may be the death-knell of all fanaticism, of all persecutions with the sword or with the pen, and of all uncharitable feelings between persons wending their way to the same goal.”

Swami Vivekananda undoubtedly made Hinduism proud on the universal platform. But most important thing is respect and acceptance of every religion. This historic address is as much needed today as it was then. Let us refresh the spirit of our "Vasudhaiva Kutumbakam" with remembering this address of Swami Vivekananda.

Popular posts from this blog

Practice of Karma Yoga: An effective Way for the Modern Man to Find Peace

September 25, 2020
कर्मण्यकर्म य: पश्येदकर्मणि च कर्म य: | स बुद्धिमान्मनुष्येषु स युक्त: कृत्स्नकर्मकृत् || "Those who see action in inaction and inaction in action are truly wise amongst humans. Although performing all kinds of actions, they are yogis and masters of all their actions. " - Bhagavad Gita (Chapter - 4, Verse - 18) The above verse seems quite contradictory, but if it is understood and absorbed in day to day lives properly, it can be the solution to many of the modern problems. Ignorance of science of Karma: the cause of sorrow: If any task in the world is to be successfully accomplished, it requires a particular skill. In the same way to live happily is also requires a skill. And that skill taught by Hindu scriptures is Karma Yoga. " योग :  कर्मसु कौशलम् " (Bhagavad Gita - 2.50) which means "Yoga is skill in work." This is the skill of living, the skill to get peace, the skill to succeed, the skill to attain spiritual heights and to attain salvati
Post a Comment
Read more